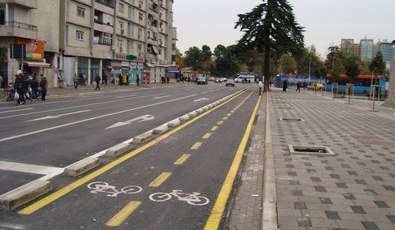 A new multimodal initiative of the Municipality of Tirana aims to reverse the trend of residents switching to private car use. A comprehensive project was started that involves stakeholders in the planning process, creates the necessary cycling infrastructure and conducts large-scale awareness-raising campaigns.

In the past 20 years mobility patterns in Tirana have changed drastically from walking to vehicles. About 140,000 motor vehicles currently circulate in the city each day. The increasing pressure of vehicles has overshadowed the use of sustainable means of transport. However, the majority of the population still uses ecological means of transport such as walking, cycling and public transportation. According to a new study developed by the Municipality of Tirana, 36% of residents use public buses while 32% use private transport.

Continuity, distinctness, security, comfort and attractiveness are the main characteristics required for a quality bicycle network in the city. Tirana lacks many of these features, which make cyclists feel more insecure and not encouraged to cycle. Bearing this in mind, the Municipality of Tirana has undertaken a multimodal project in the frame of the new Urban Plan for the city of Tirana. The goal is to improve the infrastructure for use of bicycles and to increase the number of bicycle users in the city, following the Ecovolis initiative to introduce cycling in Tirana through bike sharing.

The objectives of the multimodal project are:

The work of expanding the bicycle lanes in different areas of Tirana has already begun. Interventions have been made on twelve main streets of the city, with 20km of lanes dedicated to bicycle users. The lanes are marked with all necessary signs for ensuring the safety of cyclists. At the end of 2012 it is expected that 24km of road around the city will be dedicated to bicycle users.

The Municipality is planning to develop bicycle overpasses and intersections and to institutionalise cycling in public and private organisations in the near future. A particular intention is to create educational programs for children and young people to use bicycles as a healthy and fun way to move around the city, through several awareness-raising activities held in in different squares in Tirana.

The new initiative of the Municipality, with the involvement of private organisations and members of the public, will lead to a reduction in road traffic, an improvement in air quality, a reduction in demand for parking spaces and better public health.
The creation, expansion and continuity of bicycle lanes is the first step in the implementation of this project. The establishment of bicycle parking spaces closer to the main axes of bicycle lanes and bus stations will soon follow. The increased number of bicycle users that can be seen in the streets of Tirana is a clear sign that the initiative has already had a desirable impact on the daily lives of residents.