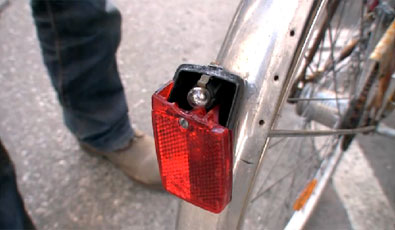 Many people own a bike, but often small ‘maintenance issues’ deter them from cycling. In Graz a local bicycle shop initiated a project which offers a mobile bicycle repair service at companies- “Bike repair days”. Employees bring their bike to the workplace and small defects are repaired while the owners are working. The measure is financed within the ‘Win-initiative’ of the chamber of commerce of the province of Styria.

Many employees use their car to travel to/from work. People who would like to cycle need good infrastructural conditions (e.g. bicycle paths and secure cycle parking), good weather conditions, but equally importantly a roadworthy bicycle.

Often small defects which could be repaired with little time/ effort/ cost (e.g. flat tires, broken brake cable, defect backlight) deter people from using their bicycle. To minimize those barriers the project “Bike repair day” was set up via a local bicycle shop in Graz which assists companies to organise these events. On these days employees bring their bicycles to workplace where they are checked and repaired by a mobile team of repairmen while the employees are working. At the end of the day the employees can cycle home on their now roadworthy bicycles.

The costs for a “bike repair day” vary according to the number of employees that bring bikes to be checked, and thus the number of repairman and the time required. The activities are financed by the workers’ council of the companies. There are three different payment models;

At the moment in Graz about 20 companies participate in the project. Typically organisation unions get in contact with the bicycle shop if they want to organize an event for their employees. Most companies want to organise a ‘repair day’ in spring when the bicycle season starts, which causes some logistical problems as it is the season when bicycle shops are at the busiest anyway.

Quite often, small maintenance issues can act as a barrier to cycling, although often it doesn’t take much time and money to repair. On average the repair team consists of 2-3 people with each repairman able to repair about 12 bicycles per day. On average about 40 cycles are repaired at each event. The largest client in Graz is the Technical University who run the event for 8 days consecutively on-site.

For those who wish to replicate the project must be aware that there must be a bicycle shop/organisation involved that can provide sufficiently skilled (and numbers of) staff.