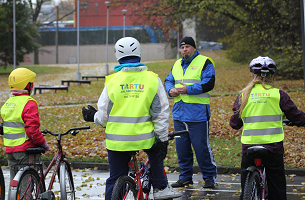 In Tartu cycle training for schools was carried out to increase the safety of cycling and encourage cycling a means of transport for the home-to-school trip.

Cycling in the Estonian city of Tartu has rarely been used as a means of daily transport due to safety issues.  Lack of experience of cycling in real traffic conditions is a barrier to many parents allowing their children to cycle to school. In 2009, during a meeting with the municipalities' road administration, the schools of Tartu and the police, problems regarding children cycling in the city were identified. The idea of delivering cycling training to schools was therefore developed. Every school in Tartu was encouraged to organise a cycling training session for 10-15 year old children who need a cycling license to ride a bike in real traffic conditions.

Each school carried out the training with very different quality standards. Some schools did not organise any training. Others taught cycle theory but did not organise bicycle training in real traffic conditions. The municipality regarded this situation as unsatisfactory as it did not provide a consistently positive experience of cycling.
It was also found that even adults have problems cycling in real life traffic situations, not so much with the practical exercise but with traffic rules. This is especially the case when they do not have a driving license and never learned about cycling rules.

As part of the Active Access project (within the Steer program) cycle training for children was developed. In the spring of 2012, two bicycle training areas were developed with maps and rules about using the training areas. One area was made for kindergarten children and school children from up to 9 years.>This training area is designed to be used by children accompanied by their parents. The second area is for 10-15 year old children, who need a bicycle license to ride their bikes in real traffic conditions on the street. Training in real traffic conditions was carried out for this age group and for adults.

The Road administration and Tartu city government helped to create the training areas and on 24th May, the Mayor opened them. A traditional cycling competition, "!Vigurivänt" was organised in which almost 100 Tartu schoolchildren participated.

Children wanting to get a bicycle license so that they are allowed to ride a bicycle on the road have to pay €10 when doing the bicycle training with the Tartu Bicycle School. At other places, including schools, they have to pay €20 for this course.

In autumn 2011, the project had 16 participants. In 2012 spring, there were already 100 participants, including 3 adults. 116 participants received a bicycle license, reflector jackets and a bicycle map of Tartu. They learnt traffic rules and how to cycle in real traffic conditions. Most importantly, they are no longer afraid of cycling in traffic.