Bicycle parking in Budapest: something got moving (Hungary) 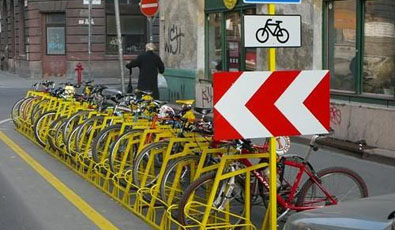 Currently biking in Budapest is primarily hindered by the lack of basic biking infrastructure. Besides the lack of a coherent system of bike paths, in the most densely built-up areas there are practically no storage facilities either. The installment of the first citizen-initiated public bike rack in a central district has created a precedent that had effects way beyond its local surroundings. After political pressures and a lengthy and expensive bureaucratic venture the local district municipality took up the initiative and is now building a comprehensive system of storage spaces.

Although in recent years biking is visibly becoming more and more popular in Budapest, it is still at a low base and is hindered by a number of obstacles - for example in the central areas the almost complete lack of public bicycle storage facilities. Bikes have to be stored in an ad-hoc manner: e.g. chained to lamp posts or leaned against shop windows.Recently, when the Hajtás Pajtás bicycle courier company moved to its new office in the centre they had to do the same - with the result of nearby residents prosecuting them for taking up space on the sidewalk and being “unsightly”. To tackle the situation the company attempted to turn two car parking spots into a bike storage space (for 25 bikes) - a so far unprecedented initiative, which lead to rather unexpected consequences.

A request was filed to the responsible local authorities, which immediately declined the request, saying “car parking spaces cannot be diminished”. The owners of HajtásPajtás - co-organisers of the extremely successful Budapest Critical Mass bicycle demonstrations - went all the way to the Mayor of Budapest, demanding to turn promises into action. What followed was half a year of intense work in the jungle of local bureaucracy.>In the end, after paying thousands of euros for variuos administrative fees and agreeing for a monthly space rental fee of 200 EUR the storage facility could be set up. (See picture.)But what is more interesting is what happened after this. A few months later the mayor of the local district informed the company that based on the positive experiences the local government is about to build a system of storage racks. Altogether 54 spots were designated at selected busy spots - and half of these spaces would be created by sacrificing car parking places. This in itself is so far unprecedented in Budapest, where decision-makers are very reluctant in implementing measures that limit private motorized transport.

In their various statements politicians are very supporting to sustainable urban mobility: they do want clean air, safe streets for children and a pleasant living environment. However, when it comes to implementing actions, they are very reluctant in implementing more progressive measures that do bring about conflicts with car owners - an important group of voters. Citizen initiatives and pressure can be extremely valuable in demonstrating public support for sustainable mobility - an excellent example is the organisation of the annual Critical Mass demonstrations - and in offering alternatives.In the end, the local district is now creating spaces for altogether 300 bicycles (May 2008) and is even negotiating with neighbouring districts to establish similar bike racks - the first step towards the creation of a city-wide bike rental system.More information: Hajtás Pajtás (in Hungarian only)See also:
Topic:
Walking and cycling
Archive
Country:
Hungary
City:
Budapest
Contact:
Gabor Heves
Contact:
Gabor Heves
Author:
Gabor Heves
Keywords: