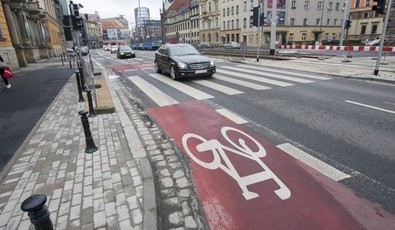 In April 2011 the first bicycle lane to replace a car traffic lane in Wroclaw was created. It is significant that the operation took place on one of the city’s highly congested arteries. It is part of a larger project called East-West Bicycle Highway.

In 1999, Wroclaw authorities announced a transport policy document for the city. Since then, they have been trying to follow its directives. One example of such efforts is the newly implemented pro-cyclists project, under which the new bicycle lane has been created by taking away one of the car traffic lanes. The Mayor of Wroclaw has commended this approach as sending a significant signal from the city authorities that bicycle transport is their priority. The city plans to increase the modal share of bicycle transport to 10% by the year 2015.

An important part of the project was the support of the Town Hall’s Cyclists’s Attorney and the city’s Bicycle Division. The lane that has been used was the third lane of a one-way street, often used for parking. As the cycle lane is narrower than a car traffic lane, it has been located close to the sidewalk and separated by a white striped lane.
The low costs of the project (no road construction costs – painting and signing only) have been included in a contract for constructing a nearby additional pedestrian crossing.
The newly formed lane is short, but it is symbolic of upcoming changes to the most known artery in Wroclaw City Centre.
In the near future other breakthrough extensions are expected, including direct connection to a contra-flow lane heading directly to Wroclaw’s Market Square.>Another bike lane will be created down the central artery in the opposite direction.

More bicycle lanes and routes mean increased well-being and satisfaction not only for cyclists, but for the whole community. Fewer cars in the urban space results in cleaner air and higher comfort of living.
Despite the fact that the newly implemented lane is just a short section of what is expected, it constitutes a clear message from the city authorities, that they are ready for radical moves in sustaining transport in the city.
For years the central artery has been criticised for splitting the central part of the town into two separate halves, disabling proper functionality of nearby areas .
The city's recent action is the first step in limiting car traffic on the artery and integrating all parts of the city centre. The idea is to form a bicycle lane along the whole of the east-west artery. If this policy gradually progresses, the bicycle may become a fair competitor in the choice of what kind of transport to use in the city.
The project signifies a turning point in the improvement of the city's infrastructure. The changes may be slow but they are certainly heading in the right direction.

The following video clip shows the route from the cyclist's point of view.