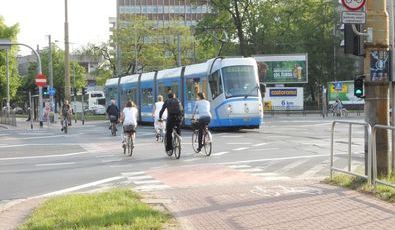 In 2010 a new bicycle crossing was created along one of the most congested streets in Wroclaw (Poland). After 5 years of struggle, cyclists can at last legally cross through the centre of the major intersection along with the trams.

The aim was to maintain the continuity of the bicycle lane running alongside the tram track in the central reservation of the main artery south of the city centre. Previously, cyclists had to negotiate 4 separate traffic signals. This has now been reduced to just one. The measure also improved safety as, in the past, some cyclists would cross the intersection illegally, together with the tram.

The new crossing cost 30,000 PLN (ca. 7.500 € ). Traffic signals for the cyclists are synchronised with trams going the same direction. The length of the green signal is enough to complete the crossing by any bicycle, even at walking speed. The lane has been painted red, making it clear and visible for other traffic users. Special barriers have been installed at both ends of the crossing which allow the cyclists to rest their foot on. This gives the cyclists the option to stay up on their bikes and be better prepared for setting off when the green signal comes.
It is important to note that the green sequence for the cyclists is activated during the green signal for the tram, so it does not affect the overall efficiency of the intersection, whilst also making it much more efficient for the cyclist following the main route to the city centre and back.

Wroclaw’s cyclists have welcomed this new element of bicycle commuting convenience. In the cycling season there are, on average, 10 cyclists crossing the large intersection on every green signal, adding up to a traffic intensity of 470 riders at peak rush hour. The effect of the crossing on the number of cyclists has not been studied. However, a study on another cycle path with a similar crossing, showed a 50% increase in the number of cyclists during rush hour as compared to the situation before the crossing was installed.
The most important lesson for the future would probably be to embrace courageous ideas. Moreover, having one breakthrough project in the city has made it easier to convince the decision makers to follow the trend regarding other projects.