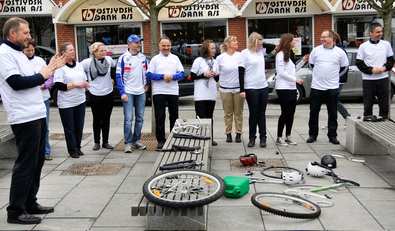 For two years, Randers Cycle City, a municipal organisation, has collaborated with 18 active bicycle ambassadors who work to get more people cycling in Randers.

The city of Randers initiated the bicycle ambassador scheme in 2011 to promote cycling as good, fun and a real alternative to other modes of transport. The aim was to find bicycle ambassadors that represented different occupations and user groups that could share the joy of cycling with other citizens. In order to recruit ambassadors, the city contacted suitable people directly. Today, the group of ambassadors consists of local town councillors, directors, representatives from cultural organisations, athletes, and activists that feel passionately about cycling.

Cooperating with the ambassadors has been very important to Randers Cycle City and has proved to be a successful way to promote cycling.

The Randers Cycle City has different ambassadors for different kinds of projects. For example, when the city wants the press to cover a cycle event or campaign, they can invite one of the famous bicycle ambassadors like the junior world champion in juniors individual time trial to join the event. This helps to ensure media coverage.

Another practical example of how the city has benefitted from having the ambassadors, was when they opened a new bicycle parking facility for commuters close to the freeway. One of the ambassadors, who was the president of a large company, gave a statement as a business owner to support the project.

The city has also used ambassadors to facilitate initiation of pilot projects in different neighbourhoods, asking the ambassadors from other districts to pass on their experiences to the citizens in the neighbourhoods where the project is being run.

People have been very willing to participate in the project as most of them want to work for a good cause, and they want to make an active effort for Randers. Randers Cycle City states to have been very lucky in finding active and enthusiastic people to participate, and they hope to continue and extend the network of ambassadors.

Through their networks and their contacts with the press, the ambassadors draw attention to the work that Randers Cycle City does to get more people cycling in Randers.