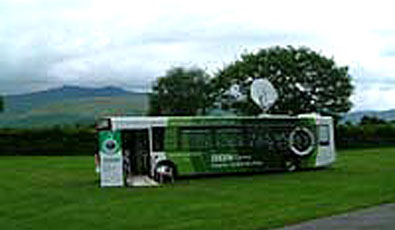 The scheme provides a good example of managing traffic to an environmentally sensitive tourist destination, through the provision of demand-orientated bus services.

The Brecon Beacons National Park is a popular recreational area for both residents and visitors to South Wales. Residents in nearby cities of Swansea and Cardiff, as well as tourists typically travelled by car through the welsh valleys to access the park, parking at key sites before continuing via walking or cycling. This high level of car dependence concentrated visitors in particular locations and increases their impact in selected environmentally sensitive sites.

In an attempt to manage access to the park more sustainably, the Beacons Bus network was developed in 1998 to provide bus services on selected Sundays and Bank Holidays, providing access to the National Park for residents (and tourists) in the surrounding urban areas. Initial funding for the scheme was secured from local authority councils, the Forest Commission and National Park Authority and later sourced from the European Union, which facilitated expansion of services and promotional campaigns.

The service involved the provision of accessible buses linking urban areas to interchange facilities in Brecon allowing users to transfer between each of the services in the network, and therefore access different areas of the park.>A commercial operator, contracted by the local authority on behalf of the Beacons Bus partnership, operates each of the services. A programme of monitoring and customer consultation to inform future development of the service accompanies the operation of the service.

Since 1998, the service has been extended and now runs from 7 major towns and cities, with rail station pick ups at a further three towns, taking users directly to the National park. Some services are equipped with bike trailers to allow users to transport cycles.

The Beacons Bus scheme provides a good example of sustainable transport provision introduced to alleviate the impacts of visitor’s car travel to a key tourist destination.