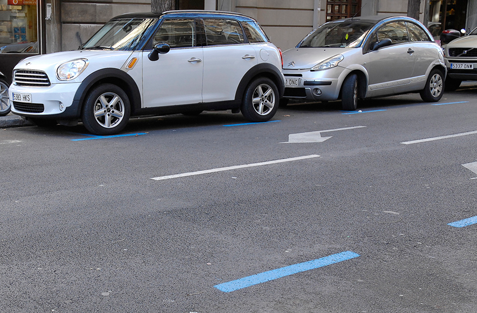 Since 2005 city centre parking in Barcelona has been restricted by a zonal parking scheme.
Context
Barcelona (like many other European cities) has experienced a steady increase in the number of cars entering its city centre. In 2005 it was estimated that there were 1.15m car trips which involved travel throughout the city centre, and 93 per cent of those were seeking parking spaces. These numbers resulted in severe traffic congestion and associated negative environmental effects. Faced with this predicament a new parking management scheme was introduced. The broad aims of the scheme were to:
In action
Parking in the city centre now falls into three categories:
Parking in the green areas cost between € 1.08 and € 2.94 per hour depending on the area (four zones: A, B, C and D) rates also vary depending on the type of site. The blue square: these are places where you can stay in 2.3 or 4 hours. The prices of these places vary between € 1.08 and € 2.42 depending on the area (Zone A is the most expensive).
There is now no free daytime parking whatsoever in central Barcelona, although, city parking is free (and a free-for-all) between the hours of 8pm and 8am. In parallel with the Green zone implementation, other Mobility Management measures implemented in the City include:
Results

One year after introducing the green zone parking system the following results were obtained: