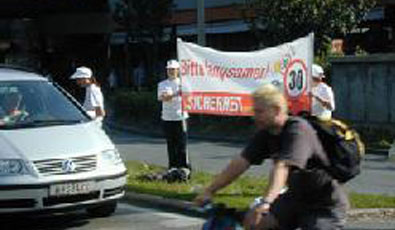 To make traffic safer, Graz has tried to get car drivers to slow down. Speed limits were lowered and speed control devices have made drivers aware of their own speed. Both children and new technology have played an important role for these actions.

Graz was the first city to introduce speed limit 30 on all non priority roads of the city. This has led to a much calmer driving style in all of the city and less accidents. But although acceptance is high, there is a tendency of the population to sort of “forget” and slowly increase driving speeds. It is therefore important, to use various methods to bring the speed limit back to the awareness of the population.

Within Trendsetter, more streets in Graz have become part of the 30 km/h speed limit street network. 80 % of all roads in the city centre now belong to the 30-zone. This has contributed to a large reduction of accidents and less noise, which also means a better coexistence between pedestrians, cars and bikers.

Other activities include a yearly car free day, organised bike tours and articles to make citizens interested in cycling and walking.

The city of Graz has intensified speed "control" by displays showing actual speeds - 13 new devices have been bought and are spread all over the city in all of the city districts at over 130 specially prepared fixed places. The devices are moved around monthly between these 130 fixed places. These fixed places are to be found especially in sensitive areas (e.g. close to schools).

Graz participated in the car free day with changing concepts, from blocking certain streets for car travel to campaigns for cycling for pupils.
Speed awareness involving pupils was carried through in the school mobility management projects.

The objectives have been achieved
The objectives with respect to the car free day have changed - the city wants to avoid a negative image for forced switch of modes and goes for a "pull" strategy instead of a "push" strategy.

As the mere feedback of the actual speed on average achieves a speed reduction of 9 km/h and especially takes away peak speed driving, and as those control devices do not cost much, this action is very recommendable to be taken up by other cities.