Awareness raising campaign By Bike to Work in Serres. Greece 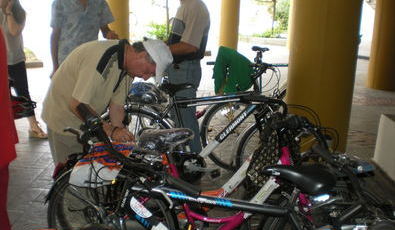 An awareness raising pilot campaign was implemented in Serres, promoting cycling to work over car-use in commuting. The municipality acted as a shining example.

Daily travel to work is about unavoidable routine trips and commuting is detrimentally affecting both the environment and society as a whole. Serres is a city with a flat terrain, ideal for walking and cycling but promoting sustainable travel to work is difficult because of commuters' existing preferences and car dependency. Municipal employees are no exception as they make up large numbers of daily commuters.

In an effort to tackle the increase of private car use even for short distances, the Municipality of Serres took action, beginning with its own resources. Within the EU funded project Active Travel Network (URBACT) a target group of its employees were selected to raise awareness of the benefits of alternative modes of travel such as bicycles.
The target group was selected from a pool of municipal employees that volunteered to take part in the campaign. The eligibility criterion for the bicycle allocation was that the distance of home to work had to be more than 500m.

A municipal bicycle fleet was distributed to the target group following their commitment to use it for travelling to and from their work place. A training seminar was provided to the campaign participants for the proper and safe use of bicycles and secondary equipment like helmets etc was also distributed. The target group had to complete a 2-week travel diary. This process took place in two phases: 1st in March 2012 and 2nd in June 2012.

The provision of alternatives to car-travel facilitated the initiative and was an incentive for joining in. Work-trip recording was a novelty and good practice to follow, in order to tackle congestion, parking management and environmental degradation of the city centre.>In addition, it was a daily task that mobilised participants and their social environment to rethink their travel patterns.

The group of employees involved experienced this travel behaviour intervention with enthusiasm. The multiplier effect of this experience has been visible as the employees use the bicycles allocated to them for other travel purposes as well, such as leisure purposes, getting other people to join them. The initiative was successful given the efforts made by the municipal staff involved, the commitment of the participants and the political support received. The feedback from the broader public was twofold: the message for sustainable travel to work is being received and the exploitation of municipal resources (human or not) for a good cause is fully appreciated.

The campaign group was only 10% of the Municipal staff due to practical constraints, bicycle availability etc. However, the response in terms of task completion was satisfying. The desire to repeat the initiative was encouraging. The recorded use of bicycles to work was promising. Significantly, according to statistics extracted from travel diaries, travel time was similar for different modes used whereas their respective benefits and costs differed considerably.
The unique aspect of this campaign (in Greece) is the use of own resources as well as the relevant work trip recording by a local authority that proves its potential within a social marketing perspective. It is about social service provision in sustainable mobility promotion.

This initiative has been an important step in understanding the requirements of active travel modes within the whole transport system of a city (especially for decision makers) and it will therefore flow into the Local Action Plan.