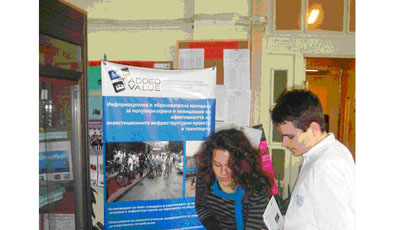 As part of the ADDED VALUE project a variety of promotional activities were carried out, with the aim of promoting a newly constructed 10km cycle path in Varna. These included various information activities, including surveys, competitions and information materials, which all involved the active participation of local students.

The rapid development motorized transport in Bulgaria during the last decades has resulted in number of negative effects, including rising air and noise pollution, increased incidence of road traffic accidents and traffic congestion. The city of Varna experiences these problems more severely, as the population of the city has been grown from 350,000 to more than 500,000 inhabitants just in few years, and during the tourist season the number of inhabitants doubles. Due to these factors and the associated increase in the numbers of cars travelling within the city, both local residents and tourists both suffer from the inevitable health and environmental problems that are associated with this trend.To link with the wider priorities of the General Development Plan of Varna which aims to facilitate the development of eco-friendly infrastructure as well as solving the city’s transport problems, the municipality introduced a new cycle path on 2007. Prior to this there were no dedicated cycle paths within the city. The aim of this campaign was to promote the new cycle path and encourage people to take up cycling, focusing on young people in the city.

Two main target groups were selected for participation in the project;More than 2,100 students in 20 schools In Varna were recruited and participated in face-to-face interviews. Throughout the interviews students were asked to describe the transport problems they experienced in the city and give their opinions on how best to promote the new cycle path, and cycling in general>Based on these interviews, it was decided to implement a campaign to inform and promote the use of sustainable transport modes to both students and other local residents, although focusing on the promotion of cycling and the new cycle path. As a result;