Awareness Campaign in the University of Balearic Islands. Spain 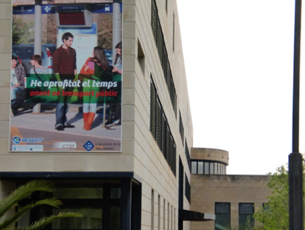 A campaign to raise awareness of public transport was run at the University of the Balearic Islands in Palma de Mallorca. It involved the installation of two large advertisements at the main road entrances to the campus, the installation of large billboard canvases in the main campus facilities, the distribution of posters, and the creation of a mobility officer figure posted at a sustainable mobility information point.

The vast majority of university students and workers commute to the campus on a daily basis by car rather than bus or metro. The purpose of the awareness campaign was to reduce car use among students and employees by showing the benefits of public transport use compared to car use. The objective was to maximise cost-effectiveness by targeting car drivers and by attracting their attention with a subject campaign transmitting a fresh and friendly image.

A prerequisite to the project was an assessment by a specialised marketing expert. A plan of action was then developed and agreed by all stakeholders. This document served as a roadmap for the implementation of the project. The advertising campaign was then launched. This consisted of the installation of large advertisements with the motto “Do you want to?” (in Catalan: “Vols?”) at the two main road accesses to the campus.>After the advertising campaign, the awareness raising campaign was launched. Massive billboard canvasses were installed on the side of the campus buildings located near the main parking facilities, and in the main campus streets. Three of these highlighted the benefits of using public transport compared to private cars, and provided general information about sustainable mobility, such as carpooling. A mobility officer also set up an Info Point on campus. This was intended to reinforce awareness raising activities by lending the campaign greater visibility among the students.

Delays in campaign implementation resulted from a desire for full consensus among stakeholders and administrative barriers. These barriers will be taken into account when carrying out future actions.
However, discussion among participants has reinforced collaboration, as well as established avenues of cooperation that will be of great use in promoting public transport in the future.
This experience has also served as an example of good practice promoting a shift in the Mallorca transport consortium communication strategy towards more focused actions in specific corridors where cars are used most.
Nearly 100% of car users were aware of the marketing campaign.