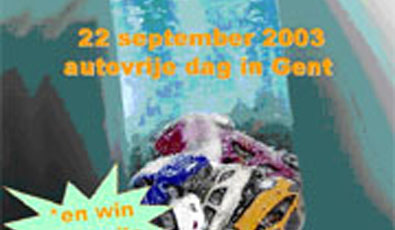 Within the Step-by-Step project a campaign to stimulate the use of biking and public transport for home-work trips was developed. The campaign in Ghent tried to focus on the first two steps of the Tapestry approach:

The concrete objectives of the campaign were :

The City Council agreed that the European Car Free Day, organised every year on 22nd September, was an ideal starting point for this campaign. As 22nd September fell on a working day (Monday in 2003; Wednesday in 2004) it was a good opportunity to involve employers and employees in the event. We wanted to make companies and their employees aware of the fact that they are the main cause of traffic congestion at peak hours, and of pollution due to car use and road safety problems.>By making good arguments and by showing that in a lot of cases there is an alternative to individual car use; we wanted to make clear to employers and employees that they are responsible for the problems, but that they are also part of the solution.

The campaign initiator is Traject but the campaign was developed and implemented in consultation with the Mobility Department City of Ghent and the Flemish Association of Public Transport Users.

We received 1039 subscriptions for the Car Free Day : 1011 participants working in one of the 38 companies and 28 individual subscriptions. 289 participants (28%) general use their car for the daily home-work trip and chose another mode for their trip on Car Free Day. However, most of the employees participating in the campaign already exhibited sustainable mobility behaviour.

The majority (76%) of the car drivers choose the bike as an alternative mode on 22nd September. Some 19% wanted to try out public transport. These 289 cars kept out of town on the European Car Free Day can be seen as 1,75km less traffic jam and / or 2 football fields less parking area needed!