Awareness campaign about public transport at the University of _ilina. Slovakia 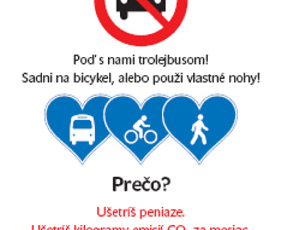 An awareness campaign about public transport at the University of _ilina is intended to change the behaviour and attitude of university employees and students toward transportation by developing practices that promote sustainable transport.

The university, with its 12,000 students and 1500 employees, represents a substantial part of the city's commuting population. Students and teachers not only have to travel to work, but also to lectures, sports and other activities around the campus. They are currently seeking the appropriate measures to reduce the environmental impact of commuting to, from and within the campus. The measures implemented during the BENEFIT campaign (co-funded by STEER, EACI) focused mainly on promoting and supporting the use of more sustainable modes of transport, as opposed to single occupancy car trips, including public transport, cycling, walking or car sharing/pooling. Before the start of the campaign, experts from the university conducted a commuter survey and transport needs assessment for the university population that provided valuable information about their travel preferences and behaviour.

The common approach towards changing public opinion about a transportation mode's effectiveness and sustainability is through logical argumentation of the economic, environmental and social benefits. The campaign followed this approach. The target groups for the campaign were well defined and key messages were defined with a main objective: to promote sustainable transport on campus.>Many activities were carried out during the campaign including info-boards with information about public transport, mobility packages for new students, stands with leaflets, lectures for students, motivation light boards at gates to university parking areas, new public transport ticket machines, interviews on student radio, articles in the university press, the introduction of parking fees, etc.
The campaign was implemented from November 2009 to August 2011. Costs were about 17000 EUR. 350 hours were spent.

Three “channels” were used for an effective campaign: thinking, feeling and acting towards sustainable transport. At first the university explained the situation and provided logical arguments through lectures, radio interviews, articles, and an e-mail campaign outlining the relevant reasons why car use is not a sustainable mode of transportation. Emotional responses were also part of the campaign. People were encouraged, by billboards and radio interviews, to use non-motorised or public transport because they would feel healthier and they would be contributing to a cleaner campus.
Finally, the message was communicated in the target area and at the target group through mobility packages, info-boards, leaflets, ticket machines and new services. Both reason and emotions were engaged to encourage sustainable transport practices. There is much potential for replication of this approach.