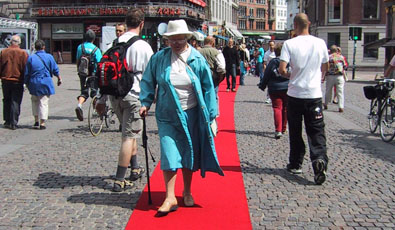 During the Walk 21 Pedestrian Conference in Copenhagen a spectacular campaign was carried out. A red carpet of one km was rolled out in the biggest pedestrian zone of the city.

Copenhagen is a city that developed a very sustainable concept of city planning. But especially for the event of the WALK 21 Coonference 2004 a eye-catching action should have been carried out to raise awareness on walking in the city.

During the Cities For People - Walk 21 Conference which was organised in June 2004 in Copenhagen the organisation team wanted to implement a visible action not only for the conference delegates but also for the population. Therefore a red carpet was rolled out. This red carpet was more than one kilometre and was rolled out through the whole Stroget pedestrian zone (= the first in the world, implemented in 1962) until the venue of the Conference.
With presentation boards and with the support of the media (TV, newspapers) the idea of the conference was transferred to the citizens. Everybody had the possibility to try to walk on the red carpet.

The idea came from the organisers of the Conference. They have been supported by Dyrup (Colour Enrichment & Inspiration).
More information can be obtained by the conference co-ordinator: Ms Regitze Marianne Hess, Centre for Public Space Research, Royal Academy of Fine Arts, School of Architecture, Philip de Langes Allé 10; DK-1435 Copenhagen K; Denmark. Tel: +45 3268 66 48