Art in the Subway of São Paulo/ Brazil 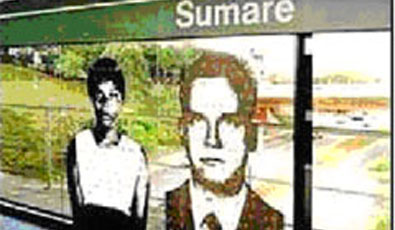 The premises that guided the São Paulo Subway conception and implantation showed a concern about the selection of the most modern technology for a high capacity transportation, its integration with other transportation modes and its high level service. The valorization and the respect to the user established a safe, fast, reliable, regular and comfortable transportation. Art and culture, in wider sense, were humanization instruments of this transportation system, staying until today as one of the best relationship channels of the Subway with its clients / users, with the city and with its visitors.

The Subway of São Paulo has been representing, since its implantation, an interference of technological character in the life of São Paulo citizens and, by a strategic option, integrates the system to several society manifestations. Assuming the permanent position of innovations promoter and consequently of social transformation agent, of urban, architectural and revitalizing renewal of the metropolis, the São Paulo Subway worries about the quality of the rendered services, its users' quality life and the widest integration with the community.
The inauguration of the complex which connected the largest Subway station and the re-urbanized Sé Square, in the center of São Paulo, signaled the appearance of a true outdoors museum just in the zero mark of the capital.

Starting from 1978, sculptures, murals and panels, signed by famous plastic artists, invaded the Square and Sé's Station internal spaces, composing unusual scenery for most eyes. Besides vivifying the cultural and artistic patrimony of the city, that initiative had the merit of placing a very important subject in the line of debates of the São Paulo Subway Company. The proposal of introducing works of art in the architectural project of the stations turned into a controversy, which mobilized the technical body of the company, gaining space in the press.
In 1988, noticing that the constructive conceptions of the stations allowed the use of art in its lines, the Subway began a program that aimed at a closer contact with the user.
In an experimental process of approach user-work of art, with the placement of works in some available spaces and in some special moments, those first experiences allowed to evaluate, through “in loco” observation and through opinion research, the positive reaction by the acceptance, appreciation and preservation of the work. After that the Subway decided to invest in the integration with the user, definitively installing the project Art in the Subway, which creates a new form of art perception, physically integrated to the Subway atmosphere, valuing the architecture and strengthen the communication with the user, stimulating the respect and the notion of conservation of the collective spaces used in the quotidian.

The installation of contemporary works of art in the São Paulo Subway allows the common citizen's coexistence and involvement with the exposed object in proportions many times superior to those obtained in the most renowned museums. Daily the São Paulo Subway provides 2,6 million trips and the user's opportunity to notice and appreciate the works of art that invariably will be within his eyes’ reach along the itinerary. The socialization of the contemporary art, the Brazilian artist's valorization, is another important current benefit of that project, because the exhibition of important contemporary works to a volume of such significant public has the effect of popularizing the artists, allowing the great public to recognize them in other facilities.