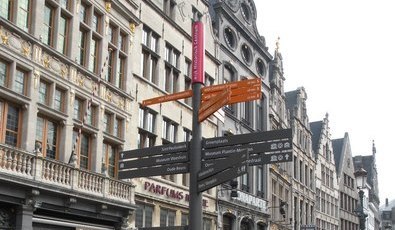 The mobility plan of the city of Antwerp aims to make pedestrians feel at home in the city. New pedestrian signs placed at strategic sites are helping to make the city more ‘legible’ for its inhabitants and visitors.

With 509,540 inhabitants (as of June 2012) Antwerp is, after Brussels, the largest city in Belgium. Since 2001, every Flemish municipality is obliged to formulate a mobility plan. The Antwerp mobility plan was preceded by a long consultation procedure with the participation of citizens, associations, urban transport companies and the Flemish authorities. In February 2005, Antwerp city council adopted the first mobility plan for the city. The overall mobility plan is translated into local mobility plans by each of the nine city districts.

The mobility plan has focused on the inhabitant’s viewpoint and improvements to quality of life. Making the city comfortable for pedestrians is an important step towards a liveable city. A city which is liveable for its inhabitants will be also attractive for visitors and businesses. The so-called “STOP-principle” is an important guideline for the city. The S stands for pedestrians, the T for cyclists, the O for urban transport and the P for private car. In every mobility decision, the city takes the expectations of the pedestrians into consideration first and only at the end the needs of the private car.

To improve comfort for pedestrians, the city is aiming to improve the pedestrian network and measures are being taken to reduce car use over short distances and to slow down traffic speed in residential areas.

The one thing car drivers and bus and railway passengers have in common, is that they need to walk a little before or after their trip to reach their destinations. This discourages some people who are not very familiar with the layout of the city of Antwerp. With new signs in place, the city hopes to help pedestrians find their way.

In the first half of 2010, 1547 pedestrian signs were put in place at 127 locations in the historical city centre to make the city more ‘legible’ for both visitors and inhabitants. A red panel on top of the sign post indicates which quarter the pedestrian is in.>Orange arrows point to other quarters, with an indication of walking distance. Grey arrows indicate points of interest in the district. Major cultural and tourist attractions and relevant facilities like public toilets, railway stations, information offices, etc are shown on the signs, featuring a total of 96 destinations. In 55 strategic places, orientation signs provide an overview of the points of interest and their locations.

Meanwhile, the city is busy increasing the pedestrian areas in the city centre and improving footpaths. They are constructing new wide and comfortable footpaths with an obstacle-free zone of at least 1.5 metres and sufficient safe pedestrian crossings. With these new footpaths the city also takes into account people with disabilities such as wheelchair users and the visually impaired.

Implementation of the signage cost 1,625,000 euros, almost half of which was paid for by the Flemish Tourist Board.

It was very difficult to find good locations in the historical city centre with its narrow streets. The locations had to be in clear sight from different points. In many of such locations underground power, telecom or data lines made it difficult or even impossible to install the signs. The signs were placed away from driving lanes and out of human reach, but nonetheless a few signs are moved every week. These signs are then removed by the municipality.

The pedestrian signs form the first stage of a global signage plan for the city. Following up on this initial phase, the city will subsequently install similar signs for cyclists and finally for motorised transport.

Pedestrian signage in Antwerp (in Dutch)

For more information, contact the Antwerp department of city development at mobiliteit@stad.antwerpen.be with reference to "pedestrian signs".