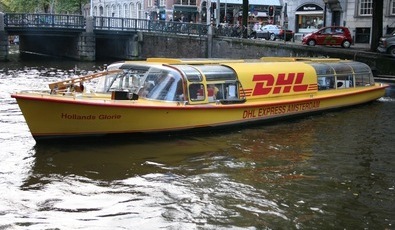 A new system of delivering postal items was started in October 1997 by the Dutch government in Amsterdam. The minister of Transport decided to support the initiative set up by DHL Worldwide Express, an international company responsible for express transport. As one of the first companies in the Netherlands and also in Europe DHL started to deliver the mails per boat and bicycle and thereby to reduce the company's car use.

Like many other large and famous European cities, Amsterdam is dominated by a very high volume of traffic which blocks the city's narrow lanes. It was already thought about using public transport for forwarding goods but DHL has found out that Amsterdam's canals provide an even better transport possibility not only in environmental terms but also concerning the economy.

Until 1997 the canals were only allowed to be used for passenger transport but for this initiative, this rule had been changed. A similar concept had also been started by DHL Ireland in Dublin in 1995 but there it has not been continued for a very long time.

The so called "DHL Floating Distribution Centre" is a specially reconstructed boat that floats through the canals of Amsterdam.

Several bicycle couriers are connected to the boat with a radio receiving set. The messengers have the function do deliver and collect letters and packets and to meet with the boat at given landing stages in order to exchange mails.>The Floating Distribution Centre was a pilot project with the duration of 18 months. The boat and other facilities were financed by the DHL and the city of Amsterdam provided labor to develop the project.

The new way of transporting goods which has been further extended since 1997 allows a fast, flexible and accurate service as it is independent from traffic jams and other traffic blocks.

Furthermore DHL was able to cut down 10 of it's delivery vehicles per year. This means a yearly reduction of 150 000 km driven by DHL vans which would use 12 000 liter diesel. The new concept was very successful concerning both, the business economics and the satisfaction of customers.

The initiative which helps to reduce environmental pollution and volume of traffic is a precursor for many other historical cities in and outside Europe and it was also tried to encourage other companies in Amsterdam to start similar approaches. The Amsterdam company Mokum Mariteam started a similar service in 2010.

This article of Matthieu Desiderio on Transport-Expertise.org gives more details and photos.