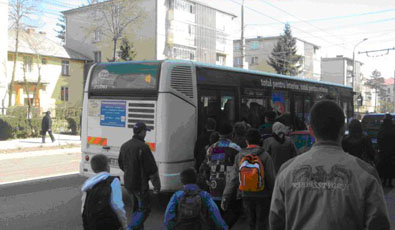 A modern and secure public transport fleet, dimensioned according to the public needs, responding to the regular passengers and attracting new passengers, integrated within the city “mobility map”, well planned at the city scale and respecting the schedule are important targets toward which city transport planners and the team assigned head for.

By looking at the experiences of other cities and regions across Europe that have well developed traffic systems, Suceava city has set off to promote a set of interrelated strategies that aim to bring about a sustainable transport system. The new bus fleet will modernise the public transport system, improve the quality of life and it will bring about a change in the inter-modal city traffic, offering citizens an alternative travel option.

The development of local economy, the decreasing of unemployment rating, the more stable jobs and increased level of salaries and disposable incomes resulted into a boost of the mobility needs and the levels of car ownership. At the scale of a medium city, spatially insufficient to permit the road infrastructure extension, as in case of Suceava, congestion and discomfort caused by road traffic are an issue.In order to counterattack the current trend and to decrease its impact, the Measure 5.6 pursues to take actions to turn the entire public transport fleet into a Euro3 one and out of it at least a quota of 40% of buses to be fuelled with LPG and 20% of LTC minibuses to be equipped with FPT systems. The concept of Eco-routes is introduced, to describe an area within which the level of noise and gas emission due to PT is considerably reduced, to give examples and to help improving the quality of life for all inhabitants (Eco-routes implemented).>The increased number of PT vehicles using alternative fuel will lead the way to a sustainable transport system.

The urban PT serviced by LTC fleet was modernized being provided by 30 new IRISBUS IVECO buses, respecting an updated timetable and routing (8 new routes), all old buses are removed. 15 buses were converted to using LPG, of which 1 bus was equipped with a converting system produced on the Romanian market, for promotion reasons. The LPG buses were marked with stickers on the rear part and the routes signalized as Eco-routes with visible signposts. The bus drivers received training for eco-driving and good patronage. The secondary, narrower routes were identified and subcontracted to a private company to be qualitatively performed with minibuses, completing the PT plan and mobility needs. The bus fleet running was largely promoted in various activities.