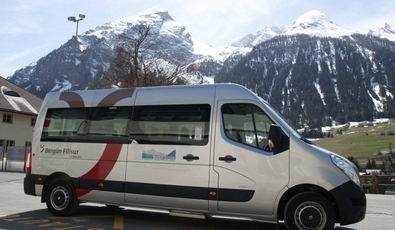 The Alpine Bus association is a platform for the improvement of public transport in Switzerland, aiming to improve access to tourist attractions. In 2005, bus service operation started in 4 pilot areas as part of a trial operation. Now the bus services operate in 8 regions of Switzerland.

In Switzerland, there are a great number of valleys and tourist attractions that fall through the cracks of public transport regional transport funding. Many regions have considerable potential for tourism, but they are only reachable by car because public transport development in these areas is poor. Problems vary according to region, but congestion on roads in general also affect public transport (eg in winter some routes become disabled). The goals of the project are the regional development of better use of public transport, which was previously poorly developed and also a reduction in private transport use in regions which are attractive to tourists. Further aims of the project are the creation of value through targeted regional marketing to target groups, including car-free households and foreign visitors.

The initiative started in December 2005 with public transport services provided in 4 pilot areas as part of a trial operation. Passengers using the service were surveyed to determine where they were from and how they would have travelled if the public transport service was not available. From these interviews a derivation of effects was carried out. In the years 2006 and 2007 in the four pilot regions (Binntal, Gantrisch, Greina, and Moosalp) experimental services were tested for the exploitation of tourist destinations by public transport. Based on the success>of a service centre for innovative and sustainable mobility DETEC in October 2007, the construction of the IG Bus Alpin - based on the pilot project - was approved. By 2009, four other regions had joined the initiative and bus services have subsequently been launched and marketed: Flix GR, Bleniotal TI (joint marketing with the region Greina GR), Chasseral BE / NE and SE valley. In the participating regions an annual saving of 100 tons of CO2 has been achieved.

Evaluation of the pilot project and customer surveys showed:

The four pilot regions will be involved as members of the association continue to help support the operation. In addition, new regions are due to be added and advised on the establishment of public transport services.