All Kids Are Cycling (Denmark) 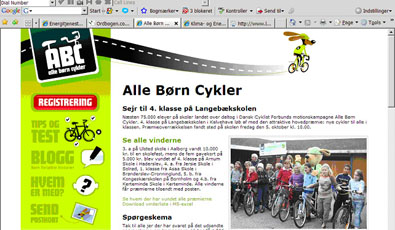 This national project seeks to promote cycling among school children with a yearly cycling campaign with the duration of two weeks during September. Schools from all over Denmark takes part of this campaign.

This national project seeks to promote cycling among school children with a yearly cycling campaign with the duration of two weeks during September. Schools from all over Denmark takes part of this campaign.

Every day the children bike to school during the campaign period they get a ticket. The parents are allowed to follow their kids. When the period is over the teachers collect all the tickets and reports it to the national campaign via a website. Walking to school is not awarded a ticket since it is a bike campaign. However, there are special rules for children who have a long way to school: If they bike to the school bus or take a ride when they get home, they also get a ticket. This special rule also applies for the smallest children (6-8 years). The class participates as a whole which means that the pupils are not competing.

The main ccommunication tool is the campaign's website.>It is used for registration (teachers register the bike and helmet days), for tips and tricks, for a children's blog, postcards, information for parents and teachers and more background information on the campaign, rules, etc.

The campaign is promoted highly to the schools and via the press until the start of every campaign.

The campaign generated the following results

In 2007 the winning class received bikes as a prize. Other classes got different things for their bike, eg. bike helmets. 37 classes got prizes, one family (the parents) also got a prize (tickets for a Tivoli).