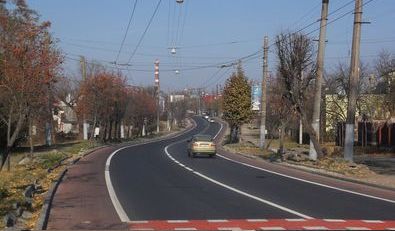 Lviv is using a systemic approach to develop cycling infrastructure and to improve conditions for cyclists in a comprehensive way by establishing a working group, setting up a cycle plan and by active promotion of cycling.

Ukrainian cities are under immense pressure; private cars – new and old – are flooding cities, buses and trams are stuck in traffic jams, parked cars are blocking pavements and accident rates are increasing. Rising local and CO2 emissions are major concerns.

In this context, the Western Ukrainian city of Lviv has taken the strategic decision to develop cycling as regular mode of transport. Improved cycling infrastructure and active promotion of cycling as modern, clean and truly European mode of transport will help to increase the number of cyclists. This will make Lviv a healthier, cleaner and more sustainable place for its citizens and visitors.

Today, less than 2 per cent of Lviv’s citizens cycle but there is good reason to hope that this figure can climb to Western European levels.

Lviv is using a systemic approach to develop cycling infrastructure and to improve condtions for cyclists in a comprehensive way. This approach includes:

Development of 9-year implementation plan for the set-up of cycling infrastructure:

By September 2011 8km of new infrastructure had been built. It can be expected that by the end of the year 50km will be ready for use. The development of cycling is hampered by outdated planning practices and the fact that most planners have not yet had the chance to plan cycling infrastructure. Therefore key issues for further work include – besides the further implementation of infrastructure – the update of national legislation and training for planners.

Lviv is the first Ukrainian city with a comprehensive approach towards the development of cycling. The active combination of various efforts has contributed to the rapid construction of cycling infrastructure in Lviv. A lively community of citizens, cycling activists, sportsmen, and decision-makers is eagerly waiting to use the new infrastructure and to change the picture of mobility in Lviv – towards more sustainable and human patterns.

Lviv / Ukraine has a population of about 760,000. It is the administrative, industrial, cultural and educational centre of Western Ukraine. The city centre of Lviv is included in the UNESCO World Heritage List. The city will host 3 matches of the EURO 2012 championship.
More on: http://lviv.travel/ and http://www.city-adm.lviv.ua/

GIZ works in the City of Lviv, within the framework of the project "Climate-friendly mobility in Ukrainian Cities“, on behalf of the German Federal Ministry for Environment, Nature Conservation and Nuclear Safety. The project is financed in the context of the International Climate Protection Initiative. More information can be found on www.mobilnist.org.ua