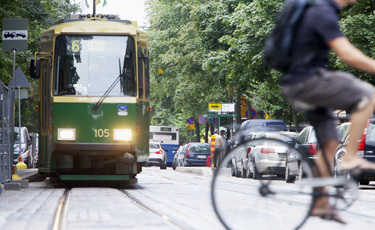 Accessibility studies conducted in the Helsinki Region helped to develop a Transport System Plan to support the use of more sustainable modes of transport and set the framework for future development.

The future urban structure of a city is highly based on its current structure. Therefore it is necessary to study the impacts of the current structure in relation to how people move in the city. In accessibility studies (SAVU) completed in Helsinki region, accessibility was analysed from the point of view of sustainable mobility, i.e. walking, cycling and use of public transport by people living in the region. The aim was to show the most potential areas for land use development from the point of view of supporting sustainable mobility.

The number of trip purposes studied was ten, based on different locations, and different distances, using different modes of transport, were calculated on the basis of an Extensive Traffic Survey carried out in 2007-2008. Descriptions of the transport network as it currently stands, as well as in 2020 and 2035 served as starting points for the descriptions of the level of service for the transport system and land use in different squares.

When different future land use and transport system scenarios are explored, the squares start to move from one accessibility category to another and consequently, the boundaries of the accessibility zones begin to change. In this way, it is possible to obatain a visual image of the impacts of these changes in the accessibility of different areas.

The results show that there is significant variation between different zones in regional travel, and the zones can be verbally described according to the way in which the residents of each zone typically travel. For example, in zone I (inner city, typical modes of transport are walking, cycling or very frequent direct public transport services) residents nowadays make 3/4 of their trips by sustainable modes of transport thus producing about one kilo of greenhouse gas emissions per day. In zones V (outskirts of the city and major population centers in the country side, trips are typically made by car, some of the trips by public transport) and VII, (scattered settlement, trips typically made by car) residents make only some 1/3 and correspondingly 1/5 of their trips by sustainable modes of transport producing 3 and 5 times as much greenhouse gas emissions than in zone I.