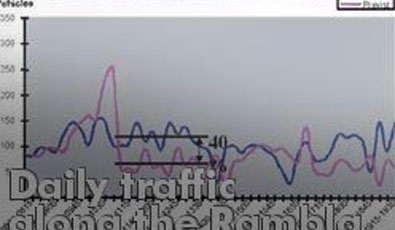 Vehicle access to a section of Las Ramblas is now controleld by an ANPR system, to ensure the enforcement of access restriction during the times of high pedestrian activity (11.00-20.30). Only authorised vehicles are allowed to enter with a speed limits of 30 kph, while open access of the 3 off-street car parks located along the Rambla has been mantained.

Las Ramblas area in Barcelona is an area heavily frequented by tourists. Thousands of people stroll along this iconic street every day. The main mode of transport here is of course walking, so that the number of pedestrians sometimes exceeds 7,000 persons per hour. These people mainly walk in a separated area in the middle of the street, whilst motorised transport uses the carriageways on either side – including a large number of buses, but also many cars. The limited space available was not compatible with large numbers of private cars, all the more so because a survey undertaken by the municipality indicated that a large part of the vehicles are through traffic, passing mainly at the same time that there is high pedestrian activity. Accidents with pedestrians are therefore very common.

The authorities in Barcelona decided to reduce the use of private cars and give priority to walking, cycling and public transport as well as for business transport by car. Therefore an access restriction for certain vehicles was implemented.

The system, developed in the framework of the European Union funded programme Civitas, controls access for vehicles travelling northeast from the Port to the city centre via Las Ramblas. Vehicles are not allowed to travel this route from Monday to Sunday between 11:00 to 15:00 and 17:00 and 20:30. The speed limit is 30 km/h. Residents are excluded from this restriction, as are the users of the three existing off-street car parks, taxis, hotel guests and the emergency services.

The control system uses 16 cameras placed at 7 points along the Ramblas. The cameras capture the plates of the vehicles and their location. Those vehicles that are recorded consecutively by all the cameras in a brief period and which are not recorded on a white list of authorised vehicles are considered to be breaking the access restriction. Two wheelers are included in the restriction.

Overall daily traffic has been reduced up to 15%, while the reduction of traffic during the access restriction time period has reduced by 40%. This brought a significant increase in the quality of the environment for pedestrians.