10 years of pioneering work on slow roads in Neerpelt. Belgium 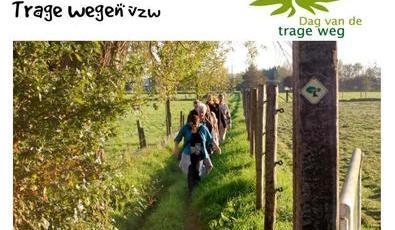 Slow roads are paths or roads intended for non-motorised traffic. In the past they could be found everywhere but many have disappeared in recent years. A non-profit association was set up to counter this, and in 2012 it looked back on a decade of revaluation.

Flanders region was once covered in slow roads, pathways intended for non-motorised traffic. Hikers, cyclists and horse riders are the main users. Together, all these country roads, towpaths, former rail beds, sunken roads, forest paths and short cuts formed a dense network for soft traffic like cycling and walking. However, many slow roads have disappeared in recent years and many more are threatened because of the construction of new housing estates or industrial zones, integration into the motorised network, or unlawful closure and intake by owners or farmers. Inadequate maintenance also often ensures that roads get into disuse and then disappear. To counter this evolution Trage Wegen vzw, a Flemish non-profit association was initiated. They started in 2002 with a mission to put the slow roads and the slow road networks back on the map.

Trage Wegen vzw set up several actions to stimulate the revaluation of slow roads. This includes assisting communities to identify, evaluate and set up local slow road networks. Cards are made, volunteers are trained, discussions are moderated and legal issues are tackled. One important returning event has been the ‘Day of the Slow Roads’. This is in fact an action weekend for everyone who believes slow roads are important. Associations, boards and residents are joining forces to take action on slow roads in their neighborhoods. Actions can be large or small, active or informative. Examples include a walk along known and lesser known slow roads, cutting open a disused path (often quite literally), inauguration with nameplates, awarding the prettiest path, delivering a petition or wish list on slow roads to the council, organising a game or clean-up, and so on. Trage wegen vw guides this process with a scenario booklet, standard announcement letters, and a presentation template.

In 2012 the ‘Golden Track’ was awarded. It highlights a town or city that has done pioneering work for its slow roads in the past 10 years. The municipality of Neerpelt was awarded. Following a complete inventory of slow roads on their territory it was concluded that several kilometres of the roads had become inaccessible throughout the years. The municipality made more than 7km of these roads open again. They went to speak with the owners and adjoining landowners. They placed the yellow-green nameplates with the slow roads logo, which are now familiar to the inhabitants of Flanders. New hedgerows were planted to create more recognisable and attractive slow roads.

Many individual cases have been contributing to a dense slow road network. More and more municipalities in Belgium have taken the necessary step to open and once again maintain slow roads.

With ten years of experience with complex slow roads, Trage Wegen vzw has become a benchmark for slow mobility. They have made a regional understanding of the term 'slow roads'. The Day of the Slow Roads combines forces and creates momentum for many local actions.

The benefits are clear: slow roads are safe connections for soft traffic. Slow roads offer, especially for short distances, an alternative and safe traffic route for pedestrians, including, for example, school children. Many slow roads make a connection between villages. Even in a city, towpaths alongside watercourses guarantee a secure connection for vulnerable road users. A slow road, especially in Flanders, is also important for nature. In this densely populated region the remaining natural areas are small and fragmented. Slow roads ensure ecological connectivity between natural areas, so many plants and animals can spread over a larger area.