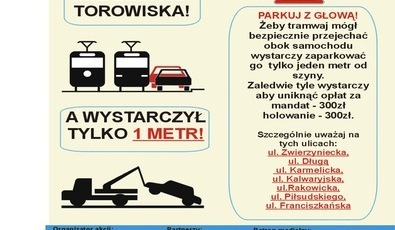 In Krakow, Poland, the city's council have started a public awareness programme aimed at car drivers who park their cars illegally and thus block the tramway. It has been introduced to make the drivers stay away from the tram track and keep the right distance, to ensure the the city's public transport system runs smoothly.

In Krakow, it is a very common scenario, when car drivers park who have parked too close to the tram tracks, blocking the the progression of the trams on their route. Krakow is one of two Polish town where the problem is most intense. In 2009 200 cases had been recorded. In one instance a tram had been blocked for up to one and a half hours.

The slogan of the action is “1 metre is enough”. It aims to make car drivers aware what distance from the tramway track is necessary to prevent disruption.

The initiator of the action is MPK S.A. – Krakow public transport company, as its duty to run Krakow's tram is directly affected by poorly parked cars. Unconcerned drivers are often not aware of the consequences of their behaviour. Their light-heartedness approach to the situation affects the whole tram infrastructure leading to tram traffic stalling, the necessity of organising detours, confusion and irritation of the passengers and the operator’s staff.

The action has received support from the City Guards and was carried for one month (March 2010). The campaign consisted of giving away informational leaflets to Krakow’s car drivers in the area of the most “offended” streets.>One of the trams was redesigned to have a dedicated posters displayed on it. Extra prevention patrols of City Guards were sent to the sites most likely to be at danger of blocking.

In some towns, apart from a regular fine and car removal, the cost of blocking the tram transportation is added. The city of Krakow does not want to go so strict, as the city council believes that education, not punishment, is the correct manner in which to deal with this situation, Additionally the action's webpage provides a link to a cooperating webpage where photos of ridiculously parked cars are published. It can be found under www.swietekrowy.pl, which means „holy cows”.
The cost of the project was relatively low as the majority of the budget had to cover the printing of leaflets and posters etc.

It is a common problem in Poland when ignorant drivers leave their cars irresponsibly with not thinking of the consequences for other road users.   A similar action had been carried previously in Poznan. Being inspired by positive results from Krakow, Poznan has also gained a reduction of blocking the tramway cars. The situation, whilst improving, still requires more work, as another edition is required to remind citizens about the problem. Low costs should encourage more large town which face the problem to introduce this educational project.