Rasing awareness of walking and cycling benefits in Făgăraș (Romania)

We are sorry, this content is not available in your language.
Af News Editor / Opdateret: 07 May 2015 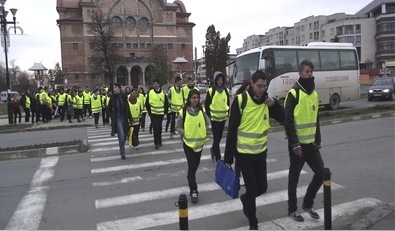 The City of Făgăraș has been a member of the Covenant of Mayors since 2011, with a target of reducing CO2 emissions by 22% by 2020.The I walk to school" 2012-2013 Campaign, implemented as an initiative of the City of  Făgăraș Energy Department, was developed as an extension of a project that was undertaken during European Mobility Week, under the slogan "Moving in the right direction!". Modules from the TRANSPORT LEARNING scheme have represented the driving force for this new initiative.

Despite the fact that the City of  Făgăraș is a small sized city and distances between activities are relatively short, studies show that there is an alarming increase in the number of car users within recent years, leading the city towards high levels of pollution and a loss of space that has now become dedicated to cars.  There is also an increasing trend of kindergarten children and school students being brought to school by car on a regular basis.

Due to its success throughout the entire implementation period, the "I walk to school" campaign is now part of the  Făgăraș Sustainable Energy Action Plan. The campaign aimed to boost sustainable mobility by raising pupils’, teachers’, parents’ and citizens’ awareness of the benefits of walking and cycling.