Supporting the development of electric mobility in Prague (Czech Republic)

We are sorry, this content is not available in your language.
Af News Editor / Opdateret: 21 May 2015 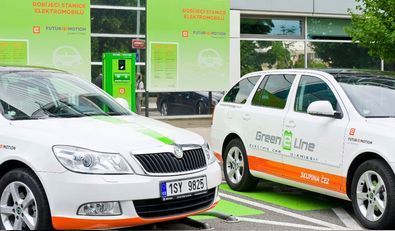 Electromobility is a project of the City of Prague which supports the development of electric-mobility in the Czech capital city. The aim is to test and promote the use of electric two-track and single-track vehicles. In addition, the city wants to raise public awareness of direct emission-free and more sustainable traffic in Prague. Improving the quality of life and reducing harmful emissions as well as reducing noise caused by urban transport also needs to be considered. Prague has taken a lead role and become a driving force in the introduction of electric-mobility in the Czech Republic.

The electric vehicles are powered by energy from rechargeable batteries which means that, whilst driving, no CO2 or other emissions are emitted.  Charging stations are made accessible by a chip key with each user having an identification code. The user selects the appropriate socket using the display navigation and the station control unit then verifies that the car is correctly plugged in.

CEZ has installed 15 charging stations, mostly for infrastructure partners, in shopping centres, supermarkets and urban regions in Prague. The first charging station was launched in November 2011 and, at the moment, 7 electric vehicles are used by Prague's power engineers . The electric vehicles consume 15kWh per 100km, equal to approximately 3 litres of petrol per 100km.  However, because of the cost of the modern technology involved, a major disadvantage is the high price of about 30 000€ for a car and 15 000€ for a battery.

The vehicle is charged as a standard single phase plug charging at 16A/230V or a three-phase socket charging up to 32A/400V.  Charging stations for standard charging focuses on the installation of ultra-fast charging stations that recharge 80% of battery capacity within 20 minutes.  As this means working with higher voltages, a special connection to the electricity network is required.

Supplier of charging stations:
EmotionCar is a Czech company, chosen as supplier of CEZ Group stations for fast and standard charging. CEZ Group produce and distribute electricity and heat energy, producing electricity from nuclear power plants, coal plants, renewable energy and combined cycle power plants.  This energy mix and the overall structure of electricity sources mean that by 2020, CO2 emissions for each MWh of electricity will probably be about half the level of 2008, achieved, for example by closing the oldest coal-fired units.

A contract between PSA (Peugeot – Citroen) and CEZ was formally signed in 2010. Cooperation between the two companies means a commitment to build at least 150 charging stations and to lease 65 electric Peugeot iOn electric cars.

Switching to electric engines is a major opportunity to reduce CO2 emissions and dependency on imported oil from politically unstable regions. For energy companies like CEZ, electric mobility means realising the potential of renewable energies.