We are sorry, this content is not available in your language.
Od News Editor / Aktualizováno: 29 Aug 2014 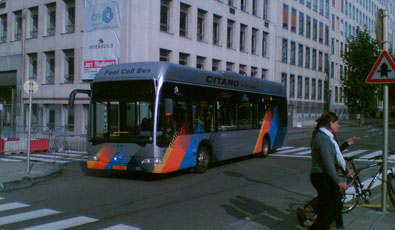 Fuel cell technology is locally emission free and the electric traction emits less noise compared to a bus with combustion engine. Within 2 EU funded projects 3 fuel cell buses have been in use in daily public transport service in the city of Luxembourg. Service was provided from October 2003 to October 2005 with grants of the CUTE-project and granted by its follow up project Hy-FLEET:CUTE from January 2006 until January 2007. The main purpose of the project was to test the concept.

A lot of information on the whole project was given to the staff before the project started to ensure engaged collaboration. Optimised organisation, e.g. well trained and engaged engineers, a large pool of voluntary drivers (making sure, that driver’s rosters complied with bus availability), localisation of the garage or optimised low downtime for refilling led to the best operating performance of all vehicles used in different cities during the projects (5.000 operating hours and 80.0000 km driven by each bus)>After the end of the test operation, one bus was transferred to the Luxembourg tram and bus museum, 2 were returned to the manufacturer. The filling station was put into stand by mode so that it can be reactivated for future use.

Compared to other prototypes, the vehicles showed a good reliability, similar to conventional buses in Luxembourg public transport.Drivers and passengers were extremely happy with the buses. Main areas of satisfaction were the smoothness of operation, the reduced noise, etc.Fuel consumption amounted to some 20 to 21 kg H2 per 100 km, comparable to 66 to 68 l/100 km. Comparable Euro 4 or EEV diesel buses in the City of Luxembourg have a consumption of about 50 l/100 km, partly due to 2 tons higher empty weight of the H2-vehicle.Filled up the buses had a range of 200 km. This is insufficient for continuous operation in daily public transport service. This disadvantage was compensated by locating the filling station near the ends of a few routes, loosing no time for refuelling once a day in the middle of the afternoon.For information regarding the HyFLEET:CUTE technology please seen HyFLEET
Topic:
Collective passenger transport
Archive
Country:
Luxembourg
City:
Luxembourg
Contact:
Diana Hein
Author:
Michael Fröhlich
Keywords: