Brest renews its SUMP as part of a master plan (France)

We are sorry, this content is not available in your language.
Od News Editor / Aktualizováno: 09 Apr 2015 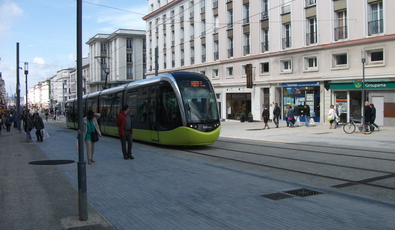 The City of Brest has developed a comprehensive master plan to reduce greenhouse gas (GHG) emissions. In addition to a Sustainable Urban Mobility Plan (SUMP), this includes plans on land use, housing, and climate and energy. This comprehensive integrated approach should increase the consistency in defining sustainability measures. The approach led to qualitative changes in the SUMP as well as an improved understanding by the public and stakeholders regarding the strategic priorities for the development of the area.
Context
The Brest agglomeration has 215 000 inhabitants and is the most westerly town in France. It is also the second largest urban centre in Brittany, with a population of 400 000 and 89 municipalities. In 2010 the Brest agglomeration decided to simultaneously renew its SUMP, land, housing, and climate and energy plans. Energy consumption from transport is responsible for 33 per cent of the local GHG emissions. Of this, 62 per cent of the emissions are caused by car-commuting.

The objective of the master plan is to reduce GHG emissions by 20 per cent by 2020 and 80 per cent by 2050. Coherence between the four plans is vital to achieve this objective. The SUMP objectives were formulated based on a territorial analysis and the priorities mentioned in the master plan. The SUMP objectives are to:
In action
The full process from the decision to the actual renewal of the plans, took three years. Throughout the process, all relevant city departments were involved: urban planning; economic development; transport; housing; energy; and ecology. A technical project leader was appointed to take charge of the urban planning and the overall co-ordination.
The first step was an update of the territorial analysis in 2011, which analysed the territory from various points of views, taking into account demographic, economic and ecological dynamics. In addition, technical studies were conducted on, for example, urbanism, housing, transport, economic development and more. The following year, 2012, was mainly dedicated to the definition of the main strategic directions for territorial development. For key geographic areas within the agglomeration, specific directions were defined, as well as for the housing, transport and environment sectors. In 2013 the strategic directions were finalised.  Proceedings were regularly submitted to a steering committee - composed of relevant elected representatives of the agglomeration’s and its municipalities’ councils – for feedback, approval and further co-ordination.
In January 2014 the new integrated plan was approved by the city council. The full cost of the plan’s development (for staff and related studies) was approximately € 2m. The estimated costs for the implementation of the SUMP are € 538m for the next 10 years.
Results
The approach to the revision of the four plans led to qualitative changes to the SUMP measures. To reach the mobility targets (such as reducing GHG emissions), new measures were defined, such as building a 2D tram line, which appeared to be the most realistic option to generate a significant modal shift. Another example was defining measures that put an emphasis on urban renewal in the central zones (i.e., zones with sufficient access to the public transport network).
In order to increase the attractiveness of these zones, the SUMP:
All the changes must be implemented simultaneously to meet the target regarding the reduction of GHG emissions. Qualitative changes also included:
In addition to these changes, the revised approach increased public and stakeholder understanding of the strategic priorities of the area’s development.
Challenges, opportunities and transferability
According to Benjamin Grebot, Brest’s Director of Urban Dynamics and the overall co-ordinator of the project, a main challenge to this approach is identifying an overall co-ordinator to manage the process in a multidisciplinary context and specialists in the related fields. ‘Through their professional experience and position in the organisation,’ he says, ‘they must be able to discuss topics in the fields of all the departments involved in the project.’

An integrated approach is now a legal obligation in major agglomerations in France, requiring local authorities to have competence in land use, mobility, housing and energy planning. ‘It is usually easier to get a comprehensive view of housing, transportation and land use in small areas,’ Grebot continues.  ‘But at the same time, bigger municipalities often have stronger technical staff, which allows deeper analysis.’

Better understanding the choices that local authorities make is another opportunity provided by this approach – made possible in this project by stakeholder working groups and involvement of the general public. In addition to access to information via the website, three public meetings were organised that outlined, respectively, a presentation of the territorial analysis, the strategic guidelines for the development area and the results of the overall plan renewal and next steps. Furthermore, during its final stages, the project was submitted for public consultation for five weeks.
Topic:
Urban mobility planning
Mobility management
Traffic and demand management
Region:
Western Europe
Country:
France
City:
Brest
Contact:
Benjamin Grebot
Author:
Annelien Venema