Before a crowd comprised of city officials, delegates from European organisations and journalists, European Commissioner Janez Potočnik presented the city of Ljubljana (Slovenia) with the European Mobility Week (EMW) Award. Ljubljana was revealed as the winner at a glamorous ceremony held in Brussels (Belgium) on 24 March. It marked Ljubljana’s second time to win the EMW award, having previously received it in 2003.

EMW is a yearly campaign that puts the focus on improving quality of life through sustainable transport choices. It encourages cities to enact measures that will enhance sustainable mobility for years to come.

The judge’s choice of Ljubljana was rooted not only in the city embracing the ideals and theme of EMW at a local government level, but also in encouraging its citizens to do the same. Stakeholder engagement in Ljubljana was impressive: 29 primary schools and 16 nurseries took part in over 250 events centred on clean air, the theme of the 2013 campaign. 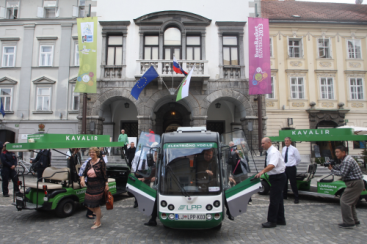 Slovenska Street, one of the main boulevards of the city, will be redeveloped as a pedestrian zone following its successful use for the ‘In Town Without My Car!’ event. This event sees a primary road (or roads) closed to vehicle traffic for one day, and given over to people to use for recreational purposes.

Fellow finalists Östersund (Sweden) and Budapest (Hungary) also attended the ceremony. Östersund made creative use of the city’s buses, turning them into spaces for meeting new people and speed dating. It also improved its online journey planner, which now shows different routes and transport possibilities, as well as information on costs, emissions, and calories burned in getting from A to B.

Budapest, who won the award in 2008, is continuing to expand its public transportation system with a new metro line and the acquisition of 150 environmentally friendly buses. During EMW 2013, cyclists and public transport users were provided with free breakfasts and books to read while they travelled.
The ceremony also saw the presentation of the Sustainable Urban Mobility Plan (SUMP) Award by Vice-President Siim Kallas, European Commissioner for Transport, on behalf of the Do the Right Mixcampaign. Rivas-Vaciamadrid (Spain) took home the award, deemed to best represent the 2013 theme - integration of economic, social, and environmental policy criteria - through its SUMP. In particular, the Spanish city has worked to combat mobility issues caused by its high rate of growth, focusing on improving road safety and reducing noise and air pollution.

In 2014 the EMW campaign will focus on the relationship between land use and quality of life. Under the slogan “Our streets, our choice” people and local authorities will be encouraged to re-evaluate the way urban space is prioritised.